It was 12:20am on Thursday morning, May 3, 2018, when my dog, Phoenix, was struggling to breathe.  Every breath he took sounded like a struggle as he wheezed to pull air into his lungs and push it back out again.  It was heartbreaking to hear and even harder to watch as I tried to pinpoint what could be making my dog ill.

After watching and hoping his breathing would return to normal, I could not stand to watch my dog struggle any more.  I drove him into the emergency hospital, which saved his life but it cost me. The pet insurance company that held Phoenix’s policy told me that they would not cover the nare and soft palate surgery he needed the next day, and I was would be lucky if they covered much of the emergency visit.  I was angry, upset, and struggling to understand how the insurance company could tell me that they did not cover surgeries when I was in an emergency situation. My dog would die without surgery but it seemed like the insurance company did not care. I was told, “Oh yeah, well it is common for a French bulldog to need nare and soft palate surgery so we will not cover it!”

Needless to say, I knew that I would switching pet insurances for Phoenix.  Why would I stay with a company that seemed rude and lacked compassion for what I was going through?  How disheartening to think that I was covered for emergencies with my dog only to realize that I was paying for a policy that did not offer me much at all.  So what do you need to know about insurance policies for your pet?

WHO DO THEY COVER?

WHAT DO THEY COVER?

Some insurance companies will not pay for congenital or hereditary issues.  French bulldogs are notorious for having breathing problems, hip dysplasia, or spinal problems, which can lead to many surgeries. Some insurances cover this and some do not.  I knew this when I adopted Phoenix, which is why I had purchased health insurance for him.  In Phoenix’s case, Nationwide Pet Insurance stated they would not pay for nare or soft palate surgery since they are a common issue in French bulldogs (i.e. hereditary).  However, Phoenix’s primary issue was a nodule blocking his airway, and the nare/soft palate surgery was performed to help increase respiratory capacity in case the nodule returned.  Regardless, Nationwide stated to me that reimbursement was determined by diagnosis noted on the vet bill. If the vet stated that nare/soft palate surgery was Phoenix’s primary issue, and because these diagnoses were excluded on our plan, they would not reimburse me.  Beware, that there is also a long list of conditions that Nationwide will not cover so make sure you read the fine print!

Also note that preexisting conditions are usually excluded from being covered by pet insurance policies. This may increase the difficulty of switching insurance plans, if needed.

PAYOUT LIMITS VERSUS NO LIMITS?

This is something that everyone should review . . . limits versus no limits on insurance policies.  It was not until Phoenix’s emergency that I truly understood why this was important.

What this mean is that insurance companies may reimburse for certain conditions but only to a maximum price limit.  For example, if your animal had issues with food allergies, insurance may only reimburse up to $600 per year for this condition.   If you have a certain cat or dog breed that usually has food allergies, having an insurance limit of $600 may not be enough coverage for frequent vet visits.

Some insurance companies, like Healthy Paws and Trupanion, do not have limits on pet claims.  They have restrictions on what they pay for (usually wellness visits and vaccinations are not covered); however, depending on your policy, they will pay out a percentage of the claim.

Payout limits can be crucial when it comes to pet emergencies!  I cannot stress this enough when you review your pet insurance policy or if you are looking to get coverage for your pet!  It is not until you are in an emergency situation that policy limits can be what helps or hurts you through a terrible situation.

In Phoenix’s emergency situation, Nationwide ended up reimbursing us for half of his vet bills, which seems like decent coverage.  However, if I had purchased an 80/20 plan from Healthy Paws, they would have paid 80% of Phoenix’s bills. That is another 30% of the vet bill that could have been in my pocket, which is a lot of money when I was not financially prepared for an emergency situation with Phoenix.

If you live on limited income or a tight budget, having an insurance plan that pays out a particular percentage of your vet claim is better.  If you are looking for a cheaper insurance with decent (but not great) reimbursement, finding a company with “limits” may work out better for you.  Again, this depends on your personal preference and financial situation. There is a risk associated with purchasing any pet insurance policy but understanding payout limits versus no limit will alleviate a lot of stress and frustration in the future.

In my situation, Phoenix had a pet policy with Nationwide, which included wellness vet visits, some of his vaccinations, as well as emergencies.  However, they have payout limits based on the diagnosis treated, only pay $75 annually on vaccinations, and also have a deductible that must be met prior to reimbursing for emergencies.  It is complicated, confusing, and when I begin to understand their plan, there are more exclusions and disclaimers that I was not aware of. If I added on a second insurance plan, the secondary insurance may pay an additional amount (previously not covered) or reimburse for situations that the primary insurance declined.

I talked to both Nationwide and Healthy Paws about having a primary and secondary insurance on my dog, and both companies told me that this is NOT insurance fraud.  It is legal to have two pet insurance policies; however, reimbursement could take longer. What that means is that one company may want to see approval or denial of a claim before they would determine reimbursement.  Essentially, you could submit the same claim multiple times before determining if either insurance would reimburse. This could delay payment, causing financial stress. However, if trying to make sure your cat or dog has full insurance coverage, this may be the solution but payments could be delayed.

In summary, having health insurance for your pet is crucial!  Expensive vet visits can add up quickly, creating stress and financial burden; however, some of the stress can be reduced with having the right kind of pet insurance.  Review your policy to ensure that it is the right policy for you and your pet, especially during emergency situations. If you are thinking about purchasing pet insurance, call the insurance company and ask several questions, especially review their inclusion/exclusion lists of what is covered.  Also, interview friends or family members to determine what pet insurance plans they have and ask if they like their plans. It is never too late to change or update your pet’s policy, and it is better to be informed now versus being surprised during an emergency situation.

If you would like to read Phoenix's full story regarding his health scare, please read Part 1 to this story. We welcome comments on this article.  However, please note that the information provided in our blog about specific pet insurance companies/policies is based on our own policies, experiences, and/or phone calls (this is NOT all-inclusive).  This blog was meant to give a general overview regarding pet insurance policies and is for informational purposes only. Please call the pet insurance company to get more specific information regarding pet policies, their inclusion/exclusion criteria, as well as quotes.  This blog was not sponsored by any of the companies named. 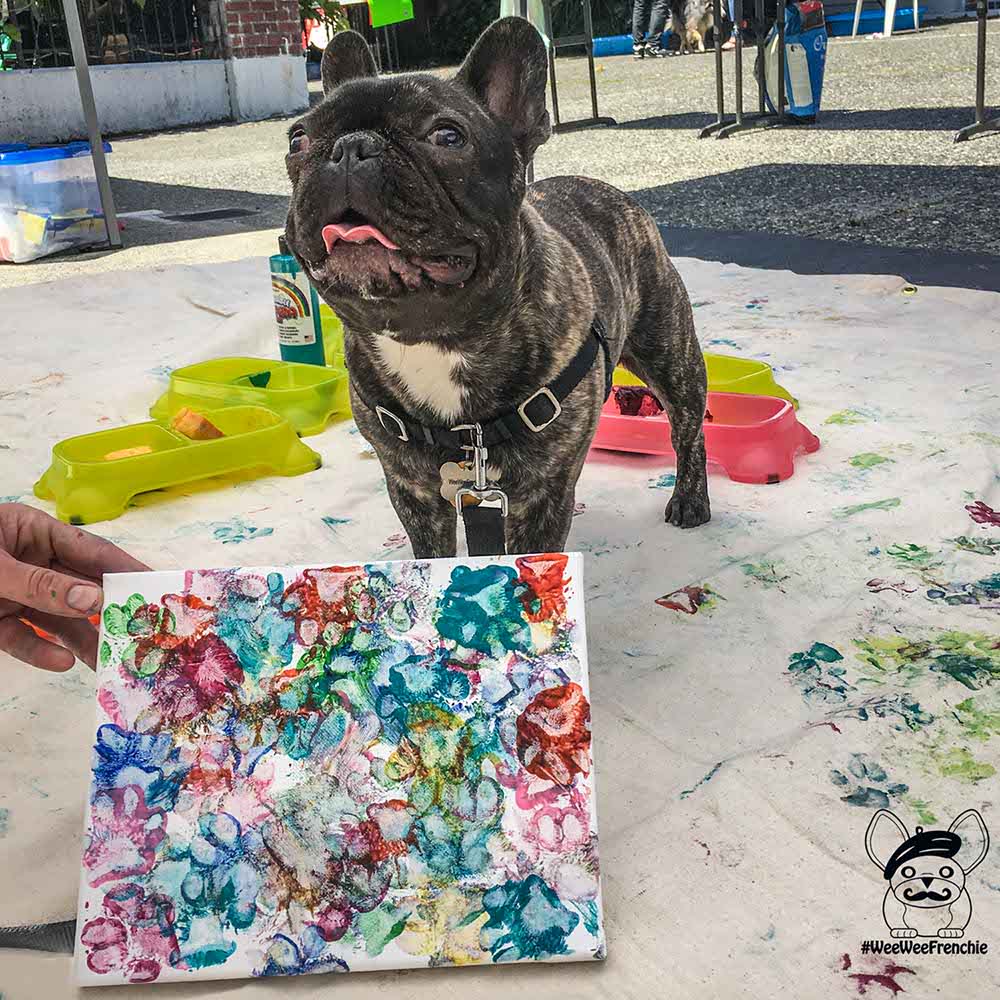 When opportunities arise for us to create more beauty in this world, it would be a shame to forgo the moment. So when I stumbled upon a dog paw painting event, I jumped at the chance. 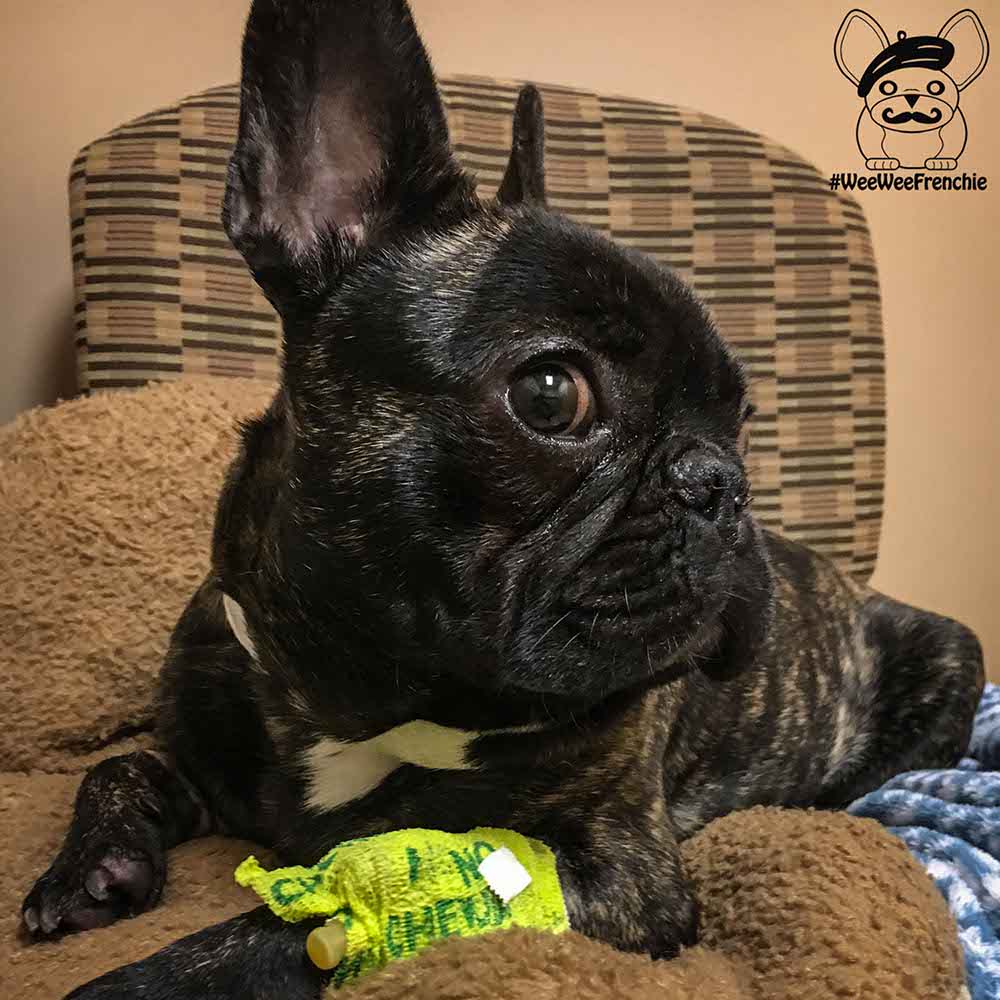 It was April 2018, and I was so excited to take Phoenix on his first plane ride to California. He was only seven months old, and I wanted to expose him to different social situations while he was still young. I was taking both of my French bulldogs, Phoenix, and his brother, Cooper, 3 years.