Our hell began when Phoenix almost died due to a polyp that was blocking his larynx.  It took one vet misdiagnosis, a trip to the ER, and emergency surgery before figuring out that Phoenix was suffering from something rarely seen in a dog that was only 7 months old!

A few weeks later nothing seemed the same for Phoenix.  Suddenly, he had several episodes of vomiting . . . full retching vomiting that was so forceful that his legs would slide out underneath him.  I always had to be quick on my feet, sprinting across the house to brace him with my arms underneath his belly to keep him upright!

The worst of it was two weeks after his surgery when he vomited so hard that I thought he died.  While vomiting, Phoenix stopped breathing and remained limp in my arms!  I rolled him to his side and suddenly his legs started moving and his chest began to rise up and down.  He was alive but I was shaken to tears!

Afterwards, Phoenix was rushed to the ER vet.  I thought Phoenix was having an allergic reaction to the surgery anesthesia from the weeks prior; however, the vet said that the vomiting episode was due to food allergies!  How many people or animals do you know that have food allergies so bad that they almost died from vomiting?

I began experimenting with different raw foods, mainly trying different proteins like chicken, goose, duck, beef, and lamb.  It seemed like everything worked but only for a week or so before it would get worse again.

It had only been a few months when I thought Phoenix was improving; however, he had another event, a rectal polyp!  Luckily, the polyp disappeared with a course of strong anti-inflammatories but the question still remained.  Why was my dog getting polyps?

During all of Phoenix’s health issues, he remained happy, playful, energetic, and the most wonderful dog that I could have ever asked for.  He continued going to obedience classes and LOVED dog school!  I think he craved some kind of normalcy in his life, and dog school provided just that.  While Phoenix’s health was poor, his intention to learn and thrive excelled!

By Phoenix’s first birthday in September, I thought that the worst of it was over.  We were able to celebrate his first birthday with a few close friends!  Phoenix enjoyed the special attention, while finally being able to play and unwind with his friends.

However, after his birthday party, Phoenix’s health made a dramatic turn for the worse!  He began regurgitating a few times a week, which worsened to almost daily.  His weight continued to drop, and I could not figure out why any of this was happening.

The regular vet was out of explanations, and I could not waste any more time.  My dog had lost 20% of his body weight even though he had a great appetite and ate all of meals.

After booking two separate procedures with a specialist, finally the conclusion was made that Phoenix was not suffering from cancer but from food allergies.  The vet swore that prescription pet food and food trials would be the only way to cure Phoenix; however, he continued to lose more weight when following the vet’s recommendations!

By this time, he was 15 pounds, which was a 25% weight loss.  His spine was protruding up from his tiny frame, and his sides were sunken in.

Even though Phoenix loved to eat, it seemed as if he was starving.  His eyes would become large every time he saw a crumb on the ground.  It was as if he had not eaten in days; however, he was being fed prescription pet food twice daily.

I could not take it anymore.  I ordered a saliva food allergy test, which took two weeks to get the results back.  Two weeks seemed like an eternity when watching my dog get thinner and thinner every day!  To say that I was in hell was an understatement.

Finally, the test results arrived, which not only showed that Phoenix was highly allergic to the food that I had been feeding him but he was also allergic to the prescription pet food too.  Everything being fed to Phoenix was making him worse, not better!

I changed Phoenix’s food immediately to beef since he was not allergic to it.  Within a few weeks, Phoenix gained 1.5 pounds!

The vets will never admit that the food allergy test saved Phoenix.  In fact, two veterinarians (out of the 8 vets he has visited) have now insulted me saying that food trials and/or dermatologists are the only way to confirm food allergies.  However, not every dog responds to a food allergy with a skin reaction (like Phoenix, some have regurgitation and vomiting), and food trials are difficult when prescription dog foods are made with at least five ingredients.

For months, I have felt inadequate, helpless, and searching for answers.  I have questioned why did my dog have to suffer.  What did I do wrong?  Which vet is qualified to treat my dog?  Why is our insurance not paying for these procedures?

Every day Phoenix and I have developed a bond like no other.  He has been brave in vet appointments when I was in tears.  He gives me kisses and hugs when he knows I need them the most.  He hops across the room to make me laugh.  And he continues to practice his dog obedience skills to show off how smart he is.

It has been two months since Phoenix’s allergy test, and he seems to be getting better!  He has gained a total of 2.5 pounds.  His stomach is beginning to have girth, and his baby hops are bouncier than ever.  Even though he continues medications to help prevent regurgitation episodes, the goal is to get Phoenix medication-free and back to being a normal, healthy dog.

To say that I have been a frazzled Frenchie mom is an understatement; however, I would not change our circumstances for anything.  Sure, things would be different and easier with another dog but Phoenix has taught me what true love and patience is, to never give up, and to continue searching for answers.  When given adversity, we have fought together, and through doing so, we have developed a strong unity.

To all of the other frazzled Frenchie moms in the world, I stand united with you.  To own a Frenchie creates a bond like no other I have ever experienced.  Wonderful people from all of the world have reached out with love, support, encouragement, and prayers for Phoenix.  In doing so, we have created friendships that I know will withstand the test of time.  As one of our friends said, “These Frenchies are always united and fight until the end!  They never give up!”

So the next time that someone calls me a crazy dog mom, I will say, “Yes, I am crazy in love with my dog, and I would not change it for anything.” 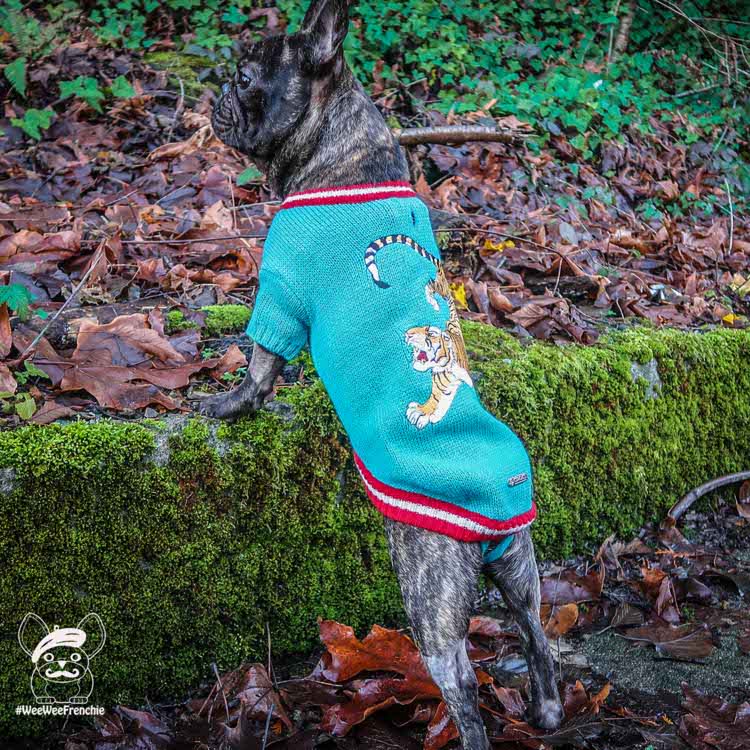 With the new year comes new styles. This year, we are loving MiAMORE pets! We wanted to showcase a few of their items for a product review because we cannot get enough! These items are unique, high-quality, and eye-catching. 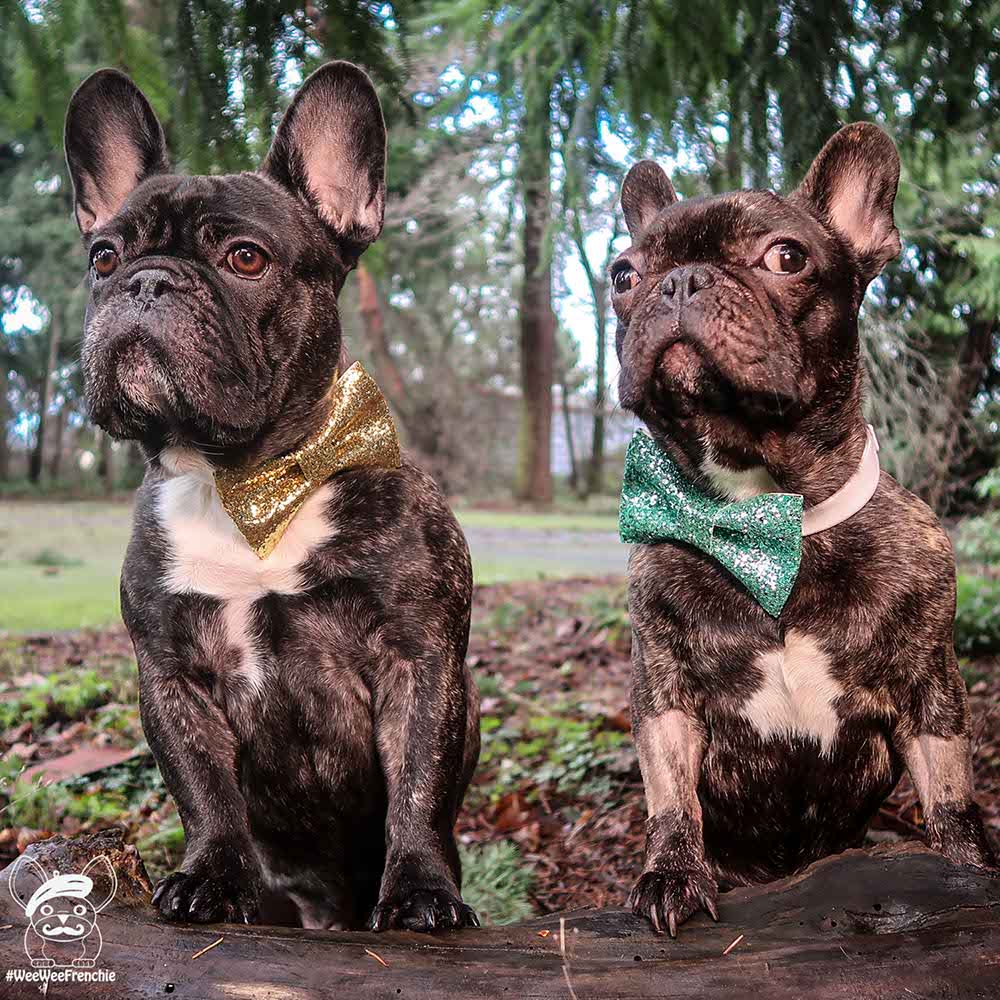 With New Year’s only a day away, we often look back at the previous year questioning what we could have done differently or maybe there is something we hope to accomplish in the year ahead. Whatever the reasoning, New Year’s is always a great time to reflect and reset.